I am starting to hate on this rest week.  Really and truly.  I feel like a slug.

I am going to California.  I will be running a 10K, and also hanging around with a friend from Kindergarten.  Yes Really.  He and I have known each other since we were probably 2-3 years old.  We went to Nursery School together.  He doesn’t run, so the race should be interesting.  I find non-runners typically don’t really handle the race thing well.  He has already shown signs of the usual non-interest, so it’s a bit of a test for him, and I think he knows that.  I’m not in top shape right now, so I also wont be doing too awesomely.  I really didn’t want to do the race, but in a way I do, just to have run a race in California.  I’m not going for any kind of 50 states thing, but…I am always interested in running in a different state. So far…I have run races in these states:

I so wanted to add Rhode Island to the list this winter, but that didn’t happen.  I ran there, but…no race. I am a little disappointed that this years race lineup is ALL FLORIDA.  We do have some Great racing here, 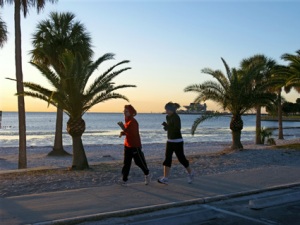 but… Have you run in different states?  Is it a priority for you?  In addition to the enticement of running in California, my coach seems to feel that this race is important for me…probably because I tried to weasel out of it…So I’m going to be a California runner.

Anyway, my childhood friend is an awesome host.   He has already queried me on things and we have so many activities lined up I think I will be entirely exhausted!  We are going to hit multiple cool museums, Alcatraz, Muir Woods, etc.

I should be really Excited!  Part of me is.  The other part of me is worried and concerned about TRAINING. I’ll be out there 5 days.  Saturday can be a rest day pre race, Sunday I will get a nice race in, and Monday can be a recovery.  So that leaves Thursday and Friday.  Thursday I can probably go for a run after I arrive.  And Friday I may also have time for that as there will be a bit of child dropping off on Friday Morning.  It just won’t really be a typical week.  I love routine, and I keep thinking… I’m going to lose fitness!!! Luckily a quick search reassures me that scientifically a few days off running will not kill my fitness.  A few weeks, YES, but a few days…Not proven.  Despite that, I still worry about this.  So…I am trying to look at it this way…this is a break in training…and then When I come back I can start to train with focus for my Fall races.  (Race season in Florida is not like other race seasons, for us it kind of starts in early october and ends in late March…) I’ll then have roughly 7 months to the first Half of the season.. and 9 til the marathon.  Plenty of time to train. Coming on the heels of rest week, I think I am also feeling the sensation of, “Lets get this on” and I know next week won’t be a getting it on week…

How do you handle taking time off?  Does it give you the willies?  Or are you able to embrace the time off with no worries?