I ordered funeral flowers for my Grandmother’s service.

This is a rather mundane task, but it took on some significance to me.  In about 2008 my Grandma moved from her home to assisted living.  Once someone moves into one of those apartments, they really never need knick knacks, etc.  So…I started to send flowers.  Flowers are temporary and a good conversation starter when loads of essentially strangers are now entering into your life.  So for years now I have been sending flowers for Birthdays, Christmas, Valentines, sometimes just to send them.  Much of the time, I was frustrated by the expense, as they always seemed so expensive, plus I am often not the fastest orderer so I have to pay extra for delivery near the right day. 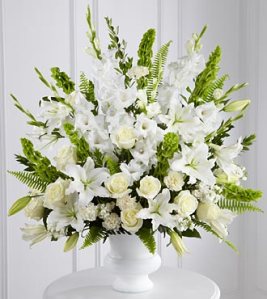 As I was choosing and purchasing an appropriate arrangement, it struck me that this was the very last time I will do this process.  It is the last thing I will do for my Grandmother.  I will never send her flowers again.  This made this all very real to me and I admit, I really did start to feel very sad.  It’s a bit of a strange thing.

So I had work for 4 hours which was actually pretty difficult.  My manager had announced to the entire leadership team that Grandma had passed, so I was fielding condolences, and trying to get out of work, while feeling a bit guilty about the whole funeral situation. She was also peppering me with loads of questions, and I know she is trying to support me, but really she was exhausting me.

I did finally get to the gym for speed day. 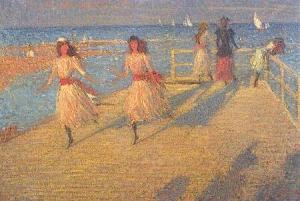 These lovely girls running, were painted by a British Impressionist.  Click here for more info…

Our weather here is on the cooler side.  It’s in the 40’s  which to the North would be a spring day.  But here it was wet and windy and really felt terrible, so I made the executive decision to do the entire workout inside on the Treadmill.

Surprisingly it went better than last week.  I did one more interval…though I am still doing 400’s.  Since I was essentially trained to do 800’s for speed, the 400’s are pretty fun.  I got through them all with only a bit of a wierd twinge in my knee which went away when I adjusted my form.

I then did some weights.  I saw my coach several times kind of giving me the look.  (The look of, Why is she here midday?) I just didn’t have the energy to explain about Grandma, and then to have him express his sympathy, I am sure I would have burst into tears.  So I avoided any conversation.  In addition, our last two conversations revolved around peeing, so I was pretty sure I just wanted a moment without any urinary talk.

I sure do hope that the weather warms as it is supposed to tomorrow.  I have a big big swim on the schedule.  And I am going to have to kind of avoid people because I took the bereavement days, even without the travel.  I need some time, and I hate to admit it, but I need some study time for the exam.  My Grandma, though she looks a stern character would find this absolutely amusing.  In addition, I’m entitled to 3 days…it didn’t say I had to travel!