I really hated work on Friday. There are too many issues going on at work and I feel I barely have a handle on anything. Everything I touch gets messier and messier, and at times I feel like I want to throttle my direct main supervisor, who is great at a distance, but this week we have had to work too closely, and it’s a giant pain.

So I rolled into the gym, and I did have a pleasant evening planned after the workout- my friend and I were headed to Outback Steak house.  (more on that later.)

I swam 2500 yards only.  This is a touch under 1.5 miles.  The clouds were beautiful. The sun was out.  The cold air and wind were also present.  In general it was an OK swim.  I enjoyed it as much as I can enjoy a swim. 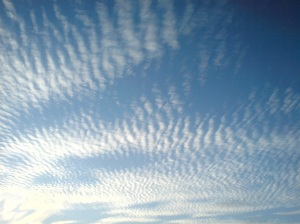 Kind of like Shelf clouds, but in a mild kind of a way…

Anyway, I got out of the pool, and Froze my tail off for the entire 250 feet or so into the gym.  It really was cold.  I know it’s Florida, and it’s probably not as cold as where you are….I know.  (I also know you are probably not wandering around in 38 degree weather in a wet bathing suit, because most of your pools are closed or indoors.)

I then jumped on the stationary for a 30 minute spin out.  It felt odd to be biking easy and not sweating away.  I learned that Friday night music at the gym is SIGNIFICANTLY better than the norm.   Blue Note recordings, anyone?  It was awesome.

I think Fridays trouble started with my getting off the bike and trying to manage my chlorine damaged hair.  It was tangled.  I eventually ended up having to do several manuvers to remove the pony tail holder from the hair.  It resulted in some loss of hair.  In addition, I could not get my hair to look OK.

I went to eat with Cindy. We had a pretty good time, except our waiter was the worst!  I actually think I’ve never had a bad waiter before.  He did not seem to want to serve us, did not get the order correct.  When I asked where something was, he called me “sweetheart”  which put me over the top.  Next time we go out, I think I’m going to suggest somewhere else.  We both mentioned how strange he was and I finally shrugged it off saying, “Well maybe he hates his job”  But I gotta admit, I woke up and I still just do not want to return to Outback again.  So they probably just lost a customer.

IN general I am feeling in a bit of a funk.  My training is fine, it’s just not at the volume we expected it to be at.  I’m not sure I can sustain that volume given my age, my actual job responsibilities, and my natural ability which is kind of low for this sort of activity.  THis is probably why I’m being steering so strongly to Triathlon.  We’ll see.