I’ve never been one for those Christmas letters that people tuck into Christmas cards.  Not being married and without children, I surely do not want to recite who all I dated all year…you know..that just isn’t want the Holiday letter is about.

But, THIS ARTICLE….from the Boston Globe has kind of inspired me to do one for the Blog this year.  Complete with appropriate commentary…

Well another year is drawing to a close.  This one has been full of interesting and exciting experiences!

In 2012, I transitioned from my job as an Emergency Department RN to the Infection Preventionist at our local community hospital.  In 2013 I continued the transition.  It’s quite a change and a challenge (read:  this new job is fascinating but an utter and total hassle at times.) I was able to travel to exciting Cleveland, Ohio for continuing education and meet up with several others who do this sort of job.  I had a blast hanging out with my roommate from West Virginia.  We enjoyed seeing all the sights, and of course learned a lot about bugs and germs. (reality here:  Cleveland kind of sucked!  I did enjoy seeing my friend and roomie again, and we wondered where all the “sights” were.) My work efforts paid off and in May, I was nominated for an Excellence in Nursing Practice Award! 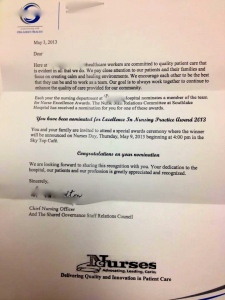 Given the negative nature of my job, I felt very honored.  (reality here:  It was cool to be nominated. Note, I did not win.  The wound care nurse did, and I gotta say, she totally deserved it!)  So it was an exciting work year.  (Big reality check:  New Government regulations made my job a nightmare this year.  In addition, the hospital reorganized the structure of our office, so that I now have apparently 3 different bosses, so daily it’s hard to know who is “in charge”.  We’ve made strides in Infection prevention, but I think some of my hair has turned gray due to my job!)

In 2014 I plan to obtain my Certification in Infection Control.  This little piece of paper will allow me to become career mobile again, so do not be surprised if I come to live in your neighborhood!   Many new healthcare regulations ensure that my career as an Infection Preventionist is in high demand, and even as an uncertified one, and a green one, I get weekly calls from head hunters trying to entice me elsewhere.

In 2013, I continued my coaching with Coach Skeletor.  We have really learned to work with each other over the year (Read:  we stopped arguing and embraced each others quirks, somewhat) and made great strides in training. I have had a lot of OUTSTANDING athletic experiences in 2013.  (no Snark, here, I really had a great year in fitness.)    I had a load of fun running in 2013.  In January I experienced my first Ragnar Relay.  I participated in Miami to Key West.  Running a relay race was totally different from a regular race, as it’s continuous and so you run at times that really make very little sense (think Miami in hotness at 3 pm, I start on an 8 mile journey). 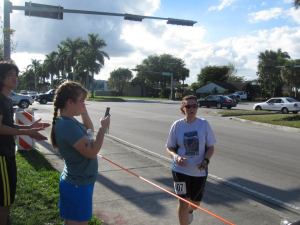 I would agree, I started out my Ragnar not really knowing any of my Van mates, but after 2 days of Ragnaring, I had definitely made some wonderful new friends, and had great stories to tell from Ragnar.  (Read:  My actual team really sucked and wasn’t fun at ALL, but I met up with my friend Minh’s team and had a blast, making awesome friends who have led me to be invited by 2 Fl to Key West teams in 2014.)  My favorite thing was the Snorkeling  which I had not done before. So Add Snorkeling to my list of VERY fun things to do.  (Not really sure that’s too athletic..)

Sometime in March/April I added to my athletic plate  the Swimming of Lucky’s Lake!   This is kind of a local legend, and something I’d been wanting to do for several years.  Lucky, or Dr. Meisenheimer is a really great guy….Check him out.    Lake swimming in Florida is an adventure unto itself.  (Read: alligators).  It was quite an award to cross for the first time! 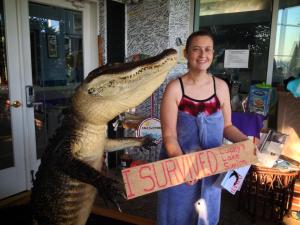 Really, I have NOTHING snarky to say about Lucky’s  at all.  If you are in Central Florida and can swim, this is the place to be.

I ran a PR race at the Orange Blossom Half Marathon.  The course was Long,  by about a half a mile for whatever reason, so I am a bit miffed, as my PR would be more of a PR than it was.  This was a training run, so this PR wasn’t really celebrated as much as it should have been.  I ran it with my friend Minh, and we had a lot of fun together.  He is a good good running pal.

In May I ran the Bayshore Marathon and got to experience all that running in Michigan has to offer.  Beautiful rolling hills, cherry blossoms, friendly folk, and Moomers salted caramel ice cream.  (Also of note: cramps at mile 17, hills at mile 25, running buddy who may have slowed me down even more than I was slowed, same running buddy failing to understand my devastation over running a PR but not *the* PR I wanted and had trained for. so yes, I got to experience ALL Michigan had to offer, and then some. I’m not proud of the marathon, but I need to mention it.  My Coach was extremely proud of me, as I had overcome Overtraining syndrome to get through this…and he was also awesome about supporting me through the entire devastation, I actually cried a little.) I Learned a lot of lessons during this race that will make me a stronger racer in the future.  (Read I never ever want to do another race like that again.)

Skeletor and I had a great training Mojo going on through the summer, when training in Florida is a challenge.  (Read:  Coach helped me to actually run miserably through the hottest months, understand that this type of training was pretty brutal, not fun, not fun at all.) Sadly in October, while training for Marathon number two I experienced some medical issues which put my training on hold. (Training crashed and burned, I spun out, and wasted months of summer training, and had to dig deep to get out of the pits of misery and depression.)

Because of the spate of bizarre injuries I suffered in October and November, I met my new Massage Therapist, who is always an integral part of my team.  (Read:  Moan kinda of became difficult to work with, expensive, and painful.) Tommy is nothing like Mona the Magnificient.  He’s kind of a laid back guy from somewhere in the real south.  He is kind and funny and I actually look forward to my Monday treatments now. We’ll see how long this partnership lasts.  He is not as established as Mona, but he does a good job and is Skeletor approved.

In October, I had the opportunity to become a Sponsored runner for Natalie’s Orchid Island Juice.  They kindly paid my entry to Space Coast Half Marathon. (it was SOLD OUT in August so this was cool!) and also provided me with awesome Lance Armstrong yellow “run Juiced” gear.  I really enjoyed being at Space Coast, even though at this point I was having all the injuries and was not training well. Below you see me with a group of running friends starting our December Plank-A-Day challenge (Space Coast was on December 1.) I’m on the far left in the yellow run juiced shirt, kind of looking down the row at all of us.  What you can’t see is us shouting out the count.  Crazy things occur at races, that we would normally never do elsewhere. 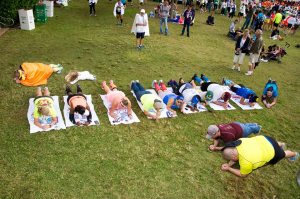 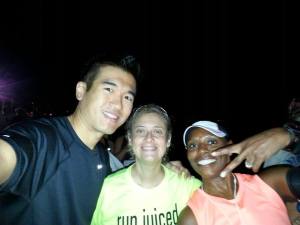 Best race of the year is a toss up between running out in Utah at altitude or Space Coast Half.  Neither were PR’s but both were fun!

In 2014, I plan to continue to run, and work with Skeletor.  My next Marathon is scheduled for July, in Pennsylvania, unless Skeletor has other plans, and he sometimes does.  I have a FUN half coming up in California as well.   (Read…I need to buckle down and work harder.)  My goals for 2014 aren’t really set…We have a coaching meeting set up in a week or two after Christmas).  In addition, I MAY or may not have agreed to race triathlon this season, which would of course change everything.

I probably need some other goals, but I have to admit, when I am getting after the training properly, and working….there isn’t much time for macrame.

So….How was your year?  Did you have moments that would have challenged even the best Christmas letter writers to put a positive spin on?  Did you triumph?  What are you plans for 2014?? Any goal races, goal times?  Come on and join me on a run!  (If you join me at work, well you have to wash your hands.)  How did I do?  too much information.  It sure seems like it!