For a rest week, this week got a bit intense… 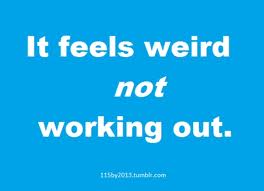 On Monday I was to bike for 20 mins and then – never saw this before- do 30 minutes of stretching and “yoga etc”  hmmm.  Not a fan of Yoga.

I think I made it about 26 minutes broken into 2 sessions of stretching, foam rolling and actually a few yoga poses I remembered from when I took a class.  There was a 2 mile run in there too, that I enjoyed.

Our pool is closed so…

SO no fun tuesday workout.  Pout.

Instead I had a weights workout and another 20 minute bike session.  This day was fun, as I had loads of time to do the weights…and so I was able to do quite a bit..

Wednesday was awkward day, I ran 3 miles in the am, 3 very peaceful glorious miles.  and then biked 30 mins in the afternoon.  The weather…has changed to something more fall like.  just ever so slightly.  75 degrees and a touch less humidity.  This combined with the rest made my times really unrecognizable from the last months.  OH My.  I also got to see a hot air balloon floating along during my run…which was lovely but did not make me feel as if I was floating on air as well….BUMMER there.

Thursday I had another 3 miler.  The weather was again Super Delicious.  and I have to admit after Wednesday  a little imp in my mind wanted me to RUN AS FAST AS I COULD..

I seriously ran possibly my fastest ever in life off treadmill mile….It was pretty neat.  I finished off my three miler with a time close to last years PR in the 5K.  So that was very encouraging. I was going to go tell the coach ALL about it, but then I realized he was working and I really had nothing to say except that I was happy. So I avoided doing that.  It is nice to share successes with him, but I am always a bit reserved in that I don’t want to be a pest.

Later that day I did another short cycle.   and a long weights workout..  all sort of crazy exercises.  My favorite new and odd one is one he calls the Harvey Wallbanger….  Not the Drink…

After loads of lunges and wallbangers, and inchworms, I had a sudden realization….

I had the realization that I had a 14 mile run on Sunday.  (Sunday is not part of the rest week,,duh.)  and that I was kind of running my legs into the ground.

So Friday…I got my Barney on with purple tights and my Lunarflys…. I had 2 miles to run “Very Easy”  so I hopped on the Treadmill and punched the time to a fairly easy pace and ran.  It was enjoyable.

Saturday I did the dreaded workout.  One hour cycle, and a 4 mile run.  The hour long cycle was tough.  My legs…were a wee bit sore and pushing through it was all I could do… the 4 miler was OK. It was hot by the time I got outside so I kind of bore with it and ran.

Today was the special day, the 14 miler.  I was so not looking forward to this, felt very nervous.  two weeks prior I had done 12 and because of the heat it felt like a disaster.

This week…much improved.  It was cooler for the first hour (75 degrees)  and then it hotted right on up…and I started to regret my love of running.  my ipod was not functional, so it was just me, nature, sloshing water bottles and about 100-200 other people I saw biking or running.  blech.  It went actually in the realm of “OK”  much better than the last couple of weeks.

I do feel good in that I am successfully completing 14’s.  My Marathon  is December 29th.  I see loads of others who are doing an earlier Marathon just starting on 9-10 miles.  So I have the endurance part, now if I could just find a tiny bit more speed.