I had a friend offer to run with me, which is a GIFT.  SO I took him up on it, especially because I was relegated to the softer, mushy Clay Trail, rather than the West Orange Bike route.  My bike riding aid delivering friend would not be able to do an assist on the Clay.

I’ve been having trouble all week with a very janky, wonky ankle.  It was causing me severe pains.  I did relent and take the predisone pack, as well as some anti-inflammatories.  It did start to feel better, but still not perfect.

Yesterday evening I visited my super massage therapist and she applied KT tape. She did a very lovely job.  I took a photo but can not seem to get it downloaded.  She only had blue or black so I chose blue. I kind of wanted “white people colored” tape, so it was less notable, but…she didn’t have it.  (I hate when they call white people colored tape “skin tone”  because it’s not the skin tone of a lot of people.)

Anyway I looked for all the world as if I had blue flames coming from around my ankle.  Oddly after about 5 minutes I realized it was REALLY HELPING.

Woke up this morning for the long run and was wandering about the house grabbing stuff to get ready and I noted a huge reduction in my ankle pain/instability. 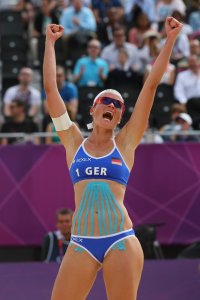 Luckily my problem involved my leg, not my abdomen.

My friend was late, OF COURSE, the world is late.  We drove up the road and planted a gallon of water at the 6 mile mark.  then back again. Then we started to run. He is faster than me but did a nice job letting me attempt to set the pace.

He is also extremely Chatty, which he knows.  So while I huffed and Puffed, he described his current life situation, his difficulty with picking up women and the fact that he is displeased that he has “relationship appeal”  but no “Sex appeal”.  I kind of tried to explain to him that most women are NOT LOOKING FOR ONE NIGHT STANDS, but…he is convinced they are out there.

We ran up and down the hills.  He had never run out there before, so he noted with some surprise that the hills kind of kept coming on the second half of the run.  I had sent an elevation map.

We made the 10 mile loop in fairly good time, but then we had to run 7 more.  He chose to turn around and do the back half again.  I TOTALLY did not want to but I thought, why not?  I am already running slow.

The whole time we were running…it was threatening to rain. 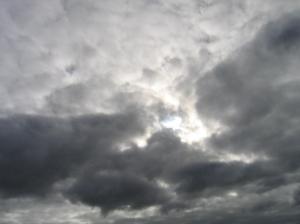 image from this Blogger, not sure if it theirs or not…check em out!

I sat down in my car and BAM. the heavens opened up with rain/hail, etc.  I started to think, yeah it had been very windy out there.

turned on the radio…tornado warning.

I then heard the strangest humming noise in the wind, I don’t think I’ve ever heard that before, but it was CREEPY. 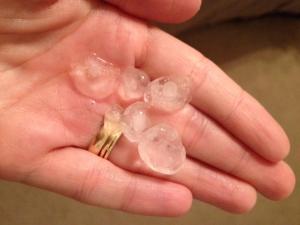 Not my hand, but sent to me by a friend in the same town.

So counting my blessings.  the funny thing is…I forgot entirely about the ankle on the run.  The KT really made it fully functional.  NOW…several hours later, it’s burning a little, but…I think we are back in business.