I do love to use this photo each time I run 9.

Apparently Nine Mile Burn is a Celtic-style band from the Mid-West United States.  I tried to locate some of their music, given how often I love to use the picture but alas, they are not Youtube people.

Here is a Link to an ACM promotions video which has them right in the middle.

Anyway, I did my 9 mile burn today. Alone, really alone.  I was lapped on the Clay road by the X/C boys  who were all very polite saying “Why hello fellow runner”  and that was about it.  I heard a lot of cows Lowing in the fields.

I felt pretty good when I hit the road.  My plan was to run 3 miles warm up, hit 3 miles at 10K pace and then do 3 miles very easy.  Yeah…thats not really how it happened.

My first 3 miles were nicely warming up, negative splitting on a slow pace.  At mile 3, I stopped had a bit of water and thought, ok time for some iPod…  right?

This is one of my current favorites…

It really applies to this coaching experiment.  So far so many big lessons about following the plan, not questioning, and not deviating….   Not that one should not question God, or religion, but sometimes…you know..there is more to a plan than one can see immediately.

So I was looking forward to it.  All I heard… “Low Battery” !

I chugged up a lot of hills and gunned it to try to get the 10K pace.  It’s not so easy on a trail that is mounded up with red clay!  In some spots I felt like I was burying my foot into piles of reddish dirt.

This road has lots and lots of rollers.  So it brought to mind Sisyphus…

Well I got the first of the 3 miles at pace, on target.  The second one turned out to be on a very hilly mushy part of the road and I totally missed that mark.  Number 3 of the set turned out fine, and was of course, mostly the down hill of the hilly mushy portion.  Even running downhill on mush is harder than asphalt.

After that I had what I call a Dud mile.  I kind of walk jogged the thing.  My pace dropped and dropped and I kept saying, Well, he did say “very easy”.  Towards the end of that, I think some sanity came back to me as I knew that very easy did not mean strolling out in the countryside.  So I picked up the pace and oddly the last mile was on 10K pace again.

Had breakfast at Panera…as I figured burning off 1,000 cals was enough of an excuse… 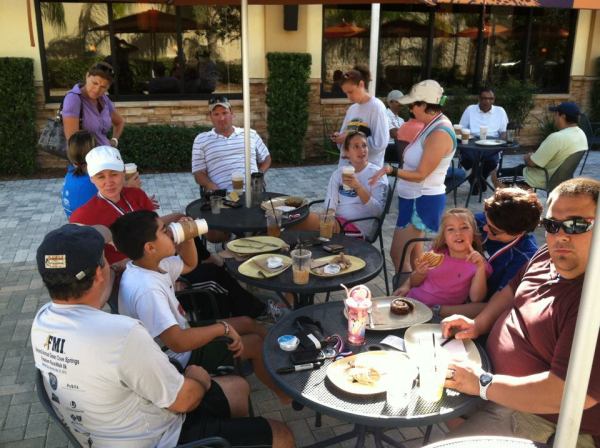 Here is a bunch of running people who ran on the Asphalt trail today.  Can you find me?? (and yes, we are a runnin’ town aren’t we?)

Now about 6-8 hours later, I am feeling the BURN!  Hip and quads are on fire.  Tomorrow is no rest day but involves only cycling and swimming, so….hopefully it gives me some time to recover because Tuesday is weights workout, and I want to WIN that one.